The thing about obscure or lesser known Kaiju (the now popular shorthand for 'Godzilla-style Giant Monsters') is their obvious lack of exposure. Although the internet has been an amazing help in bringing many of these obscurities into light, it still pays to repeat, re-post, and re-share such information whenever possible.

I might not be a 'Kaiju Historian' or 'Tokusatsu Scholar' on the same level of the likes of Steve Ryfle, August Ragone, Stuart Galbraith IV, Keith Aiken, David Kalat, or Alien Geekokon the Lonely Super Brain, but, in my own small way, I can still contribute to the genre and its fan following: giving unloved and overlooked Kaiju little extra exposure even if they've been featured elsewhere before.

This is the case with today's subject, a lost fantasy film from 1934 entitled "Daibutsu Kaikoku".

Despite the original "Godzilla" starting up the Kaiju and Tokusatsu genres as we know them today, there were earlier Japanese produced fantasy and science fiction films made well before the 1954 milestone, however, many of these productions became lost to time or simply didn't make enough of an impact and were quickly forgotten soon after.

Think of this like the 1952 re-release of "King Kong" which had a far greater impact on worldwide cinema than its original 1933 premiere, or the numerous, but largely forgotten giant monster pictures made before Kong's theatrical debut.
Neither King Kong or Godzilla were the first giant movie monsters of their respective countries, let alone in human fiction and myth, but both did made far bigger splashes and continuous rippling effects compared to their predecessors.

"Daibutsu Kaikoku", also known by the longer English title of "The Giant Buddha Statue's Travel Through the Country",  is one such pre-Godzilla Japanese giant monster fantasy.


The following selection of limited information comes from the Monster Kids Classic Horror, and Kaijuphile web-forums (Beware! The former link is filled with pop-up ads!) and were originally posted / re-posted by forum members Bakeneko and Mattman, respectively.


DAIBUTSU KAIKOKU (1934)
This means THE GIANT BUDDHA STATUE'S TRAVEL THROUGH THE COUNTRY.

A giant Buddha statue (labeled “33 meters tall in height”) comes to life and goes on a nation-wide tour to save the people. After visiting some tourist spots in the Chūkyō region (a metropolitan area centering around Nagoya city), the Buddha statue flies away to Tokyo in the clouds. This was going to be a film franchise, but due to financial problems, they never got made. Now, it is considered lost.
Yoshiro Edamasa said to inspire Eiji Tsuburaya to get into the special effects industry. Kind of like the way Willis O'Brien inspired Ray Harryhausen to become a stop-motion animator. Yoshiro akin to Obie had a project that never got made called THE JUDGEMENT OF THE SOULS, which is a science-fiction thriller.


Now, question. Didn’t daikaiju (giant monster) movies exist in the 1930s Japan? The answer will depend on your opinion. If you think Daimajin (1966) and its two sequels are giant monster movies, you can call Yoshiro Edamasa’s 大仏廻国 Daibutsu Kaikoku (1934) a giant monster movie, too. The title can be translated to The Giant Buddha Statue’s Travel Throughout the Country.

As the title describes itself, a giant Buddha statue (labeled “33 meters tall in height”) comes to life and goes on a nation-wide tour to save the people. After visiting some tourist spots in the Chūkyō region (a metropolitan area centering around Nagoya city), the Buddha statue flies away to Tokyo in the clouds. Originally planned as multi-part films but (possibly by financial problems) the sequels were never been made.

According to the magazine article at that time, it was a “half religious, half sensational film in the style of King Kong” and had some spectacular scenes such as the statue “strides over a train,” “rests his heads on a three-story building,” “makes geisha girls dance on his palm” etc. The “heaven and hell” sequences were filmed in color. This film was shown only in the limited area and is now considered to be LOST.

Edamasa was a cinematographer/director who worked on 145 films between 1914 and 1934. In 1928, he directed a feature length science fiction thriller called 霊の審判 Rei no Shinpan (trans: Judgement of the Souls) for Bando Tsumasaburo Productions but it has never been completed. Edamasa is also known as a man who led Eiji Tsuburaya into the film industry. 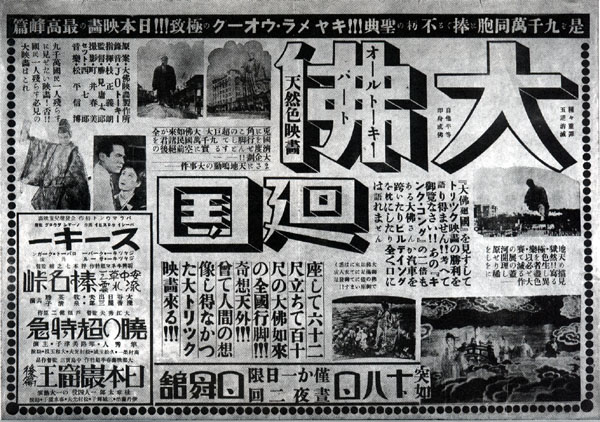 Daibutsu, or Giant Buddha statues, are somewhat commonplace throughout Japan and therefore it wasn't too big of a stretch in imagination by having one of these humanoid effigies come to life and walk about the countryside.

Films made on that same subject, however, are not as common, though totally normal completely inanimate Giant Buddha statues are used as interesting locations throughout Japanese films and television programs, however, though the only one I can confidently name at the time of this writing is 1994's "Zeiram II".

Giant living statues (or even smaller human-sized ones for that matter) are a recurring story trope throughout worldwide fiction, so I'm not even going to attempt to name check them all beyond the usual suspects of Talos (from 1963's "Jason and the Argonauts"), or Japan's own Daimajin (from the 1966 trilogy of "Daimajin" films).

The Giant Buddah Statue of this unaccounted film stands apart from most of the aforementioned by being a completely benevolent figure, one who seeks out to help us tiny humans as opposed to terrorizing us. As much as I try to give older fantasy and science fiction stories more credit in their construction and intelligence, it'd be impossible to deny just how 'on-the-noise' this character quirk is... Our wandering friend here is a Giant Buddha Statue, after all!

I also think it's safe to assume that the title hero of this film was brought to cinematic life through basic make-up effects and costuming over that of the more elaborate full-body creature suits, which are the norm for most Japanese giant monsters and fantastical beings.

Lastly, for posterity sake, I'd like to make mention of the film's only known actors, Hidemichi Ishikawa, Kazuyo Kojima, and Tankai Soganoya; the latter two listed might have been playing themselves if some online sources are to be believed.

Which begs this additional question from yours truly as to whether or not "Daibutsu Kaikoku" was a true fantasy film narrative, or some offbeat travelogue or documentary-drama, akin to Walt Disney's "The Reluctant Dragon" (1941)? 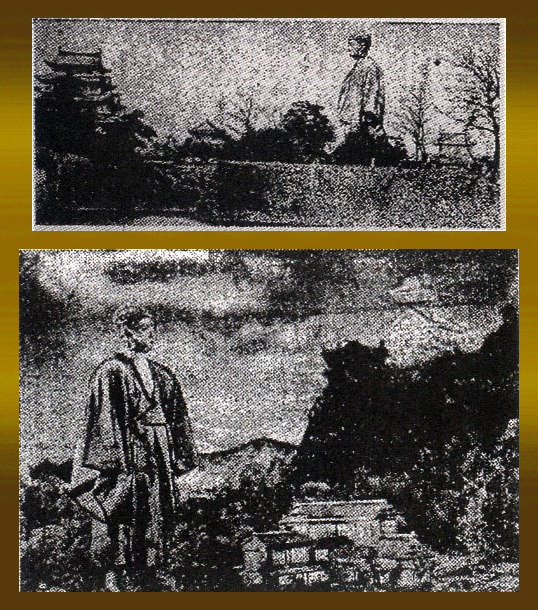 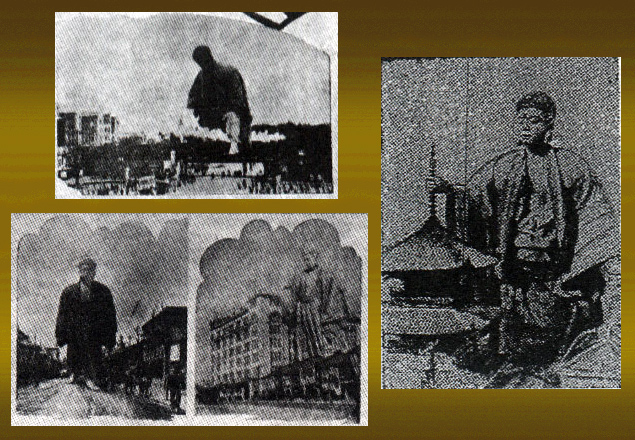 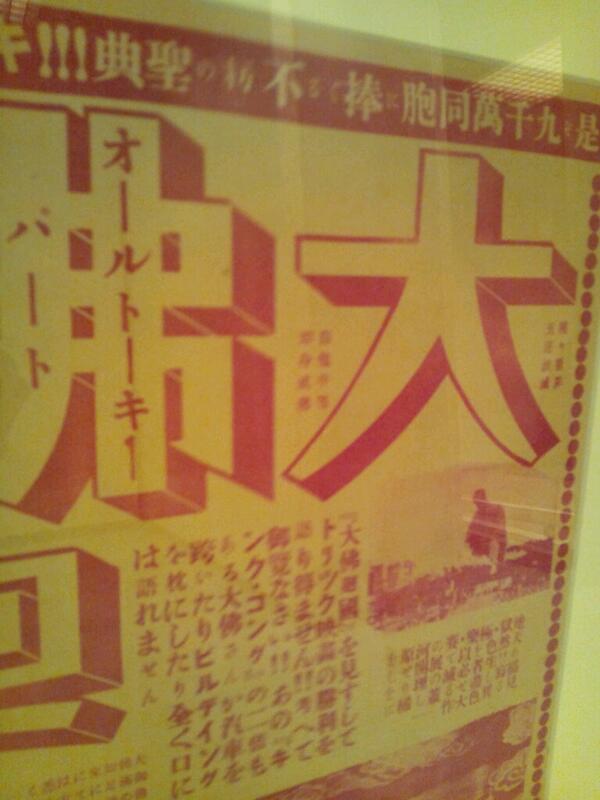 Japanese blog that discusses the various real-world locations of the film.

Japanese Book Based on the Early, Pre-Godzilla Era of Tokusatsu Entertainment

The Sparse IMDB Page for the 1934 Flick.

Huge thanks to the Japanese prop maker and effects artist Taichi Yamada for bringing the following to my attention through Facebook:

There's currently a modern day remake of "The Giant Buddha Statue's Travel Through the Country" being worked on back in Japan. This planned remake seems to be a crowdfunding affair so no clue if this will even see completion through said funding, but it's still worth mentioning as obscure giants need more love and exposure.