So this post is based around the lesser known 1987 Japanese fantasy film "Princess from the Moon" ("Taketori Monogatari").

Produced by both Toho Co. Ltd and Fuji Television, "Princess of the Moon" was a prestige picture, based on the famous Japanese folktale "The Tale of the Bamboo Cutter", also known as "Princess Kaguya".

I'd go into further detail, especially the original story's proto-science fiction elements. But I'm not THAT good of a nonsense scholar, so I don't want to start spewing inaccuracies from the proverbial hinder, if you will. And besides, Wikipedia is NOT as useless as the so-called 'normal masses' will tell you otherwise, so here's their informative article on said folktale.

And instead, I'm going to focus on the 1987 adaptation's lone Kaiju named The Sea Dragon (or simply Dragon).

Contrary to popular belief, mythology never remains constant, between all the various retellings and revisions done to them.

What Disney Animation did to the many Grimm Brothers fairy tales, and Ray Harryhausen nixing the sea monster Cetus, for an original character with the unoriginal name of The Kraken, are both examples of this.

Well, "Princess of the Moon" decided to put a giant monster into its own retelling, along with a newer sub-plot to get it there.

Basically, the half-human / half-lunar alien Kaya (Princess Kaguya herself), attracts the attention of several royal, and high ranking suitors. And Kaguya sends all of them on virtually impossible tasks, in order to sway their affections well away from her.

One such task sends the only real love interest of the lot, to sail to the ends of the Earth. And he, along with his crew, have a disastrous oceanic run in with The Sea Dragon, who promptly sinks the 'good' suitor's ship, with all hands on board.

I'd gleefully say 'Great job on that mess, Princess Kaguya!' But seeing how the somewhat aloof alien-human princess does indeed mourn this particular tragedy, by loosing her one decent would-be husband, that would just be mean spirited.

"Princess from the Moon" is one of those obscure Japanese fantasy films that the more mainstream Kaiju fans here in America MIGHT have heard of in passing (more on that later), but never really followed up on it.

Now there is a rather unfortunate bias these fans have towards all other forms of Japanese science fiction and fantasy. Mainly because Godzilla himself ins't in any of these non-Godzilla projects. And as such, they will openly dismiss and ignore even the exciting entries into the genre. Like last year's "Pacific Rim", and the better series within the Ultraman franchise.

But equally as problematic, is that most of these overlooked Tokusatsu productions are...well...just not that good, when finally seen. Or all that interesting, even by their own individual merits.

Now don't get me wrong, for "Princess of the Moon" is NOT at all a bad film!

It is a very well done, straight faced production, filled with a strong cast of equally prestige Japanese actors. Including world famous veteran Toshiro Mifune, as Taketori-no-Miyatsuko; the woodcutter-turned-wealthy adoptive father of Kaguya.

But like most big studio prestige films (prestige is a fun word to use), it's mostly pomp with very little circumstance. And as such, kind of monotonous to get through, viewing wise.

The film was directed by the acclaimed director Kon Ichikawa, whose work has often been noted by having 'a certain darkness and bleakness, punctuated with sparks of humanity'. However, "Princess of the Moon" is the only film of his I've seen, so I can't tell you for sure if his signature style also includes the aforementioned monotony.

Though with all that said, I'd really like to see his feature length documentary "Tokyo Olympiad" (1965) sometime soon.

Which finally brings us to freaking The Sea Dragon himself; he's barely in the blasted movie!

And no, I'm not being a bitter Kaiju fan here, but the monster's presence is so short, and virtually as pointless, that I honestly believe the movie would have benefited by NOT including the creature to begin with. And instead have Princess Kaguya's true love, be taken out by a regular sea storm. Just like the contractually obligated dead parents from Disney's "Frozen" (2013).

And what little screen time The Sea Dragon does have, we never really get a good look at the monster. Mainly the stiff puppet's back, being pulled through the water, of a smoke-covered model set.

With said, the only good images of The Sea Dragon have been from the few toys and promotional photos made. And so minor are these, that I was forced to make the following composite images through online theft (original web sources are self explanatory). 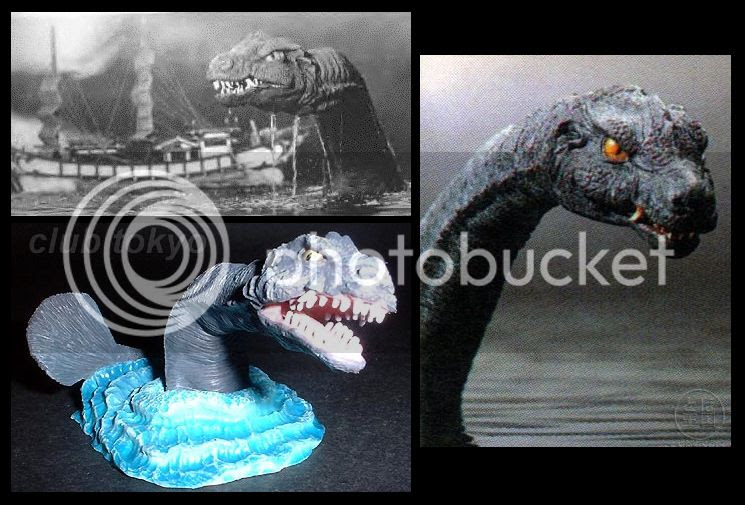 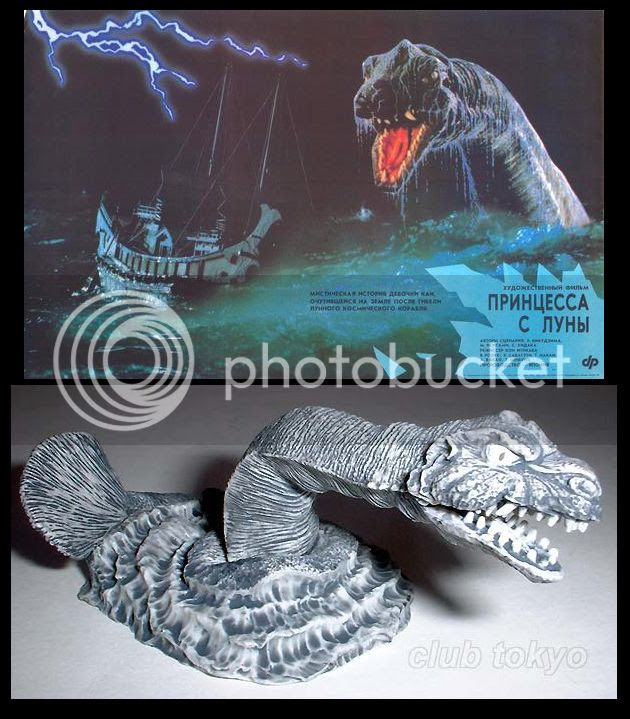 So how come A LOT of American Kaiju fans seem to be more aware of the minor creature, over the bigger film it originates from?

For a long while now (and still happening, apparently), a lot of people assumed that The Sea Dragon was a recovered, or refurbished monster prop from the failed Toho and Hammer Films co-production "Nessie" (1976-1979).

This of course have long since been disproved, as The Sea Dragon and The Loch Ness Monster from that unproduced effort, are two completely different, unrelated monsters. Both fictionally and actually.

But it's always worth mentioning, and to clarify the situation further, here's some really informative articles on the uncompleted making of "Nessie".

Posted by Enshohma at 2:29 AM No comments: