In Search for the Giant Sea Snails That Never Were

For the longest time, I had hope to present heavily detailed and researched articles based on lesser known giant monsters, or 'Kaiju' as all the hip kids are all calling them these days.

I honestly can't freaking believe that this once relatively obscure Japanese term has now become recognizable slang in modern American popular culture...Thanks for nothing "Pacific Rim"!

However, I've come to the sad realization that I cannot effectively write such articles without sacrificing precious time spent on more rewarding gigs, like paying art commissions and my own planned published comics. And my resources for doing such research in highly limited, or in the case of certain individuals that I care not to name, highly unreliable.

But like some kind of demented Johnny Appleseed harvesting a field full of deadly Triffids, I can at least plant the seed of awareness for such obscurities, and give these lesser known Kaiju some limelight beyond long defunct web-sites from the distant internet past, or lost within pages-of-pages of forums and related discussion threads.

Hopefully such quick and easily written blurbs, with a (BIG?) dash of op-ed journalism, will inspire other writers to take the baton and create superior articles connected to these obscure monsters in questions. Or not.

Let's start things off with a dip into the always fascinating (if sometimes problematic) world of monster movies that were planned and announced, but never saw life as finished films or television projects. Even if, again, the available information on these obscurities are limited at best.

As with the case of today's subject, "Snails", a proposed 1979 monster movie that was brought to my attention by 'mdcarter' and his now incredibly old website Unmade Giant Monster Movies.

BEWARE before you click on the highlighted link above, for Unmade Giant Monster Movies is an angelfire-based website, where pop-ups and other technical disturbances are common place. The page has some nice tidbits from the world of unproduced monster movies, but sadly I can no longer reach its aforementioned creator mdcarter, and I plan to re-post as much of that site's content to my blog here, throughout the year of 2016.

Here's the text originally posted (re-warning: its angelfire) in connection to "Snails" from said site:

According to The Illustrated Dinosaur Movie Guide: "Test reel for an unrealized feature about people stranded on an island in the Bahamas attacked by thirty foot tall stop-motion sea snails. With animators Phil Tippen (Phil Tippet?) and Tom St. Amand in character roles."


"The Illustrated Dinosaur Movie Guide" was indeed an actual book, written by Stephen Jones, and with an introduction by the late, great stop-motion animator and fantasy film legend Ray Harryhausen. And was published by Titan Books in 1995, though some sources also note of an earlier publication in 1993. And like an age old gypsy curse placed upon The House of Enshohma, "The Illustrated Dinosaur Movie Guide" is long out-of-print.

Sure, there's probably an e-book option, or some kind of computer download that's unfriendly towards older PC novices like myself. So screw it, moving on...

The concept art posted towards the top of this article is also legit, but was presented online by an individual dubbed 'MovieMatt' (or 'mattman') on various monster movie related forums and message boards. Here's one such example (scroll downwards).
ENSHOHMA'S TAKE on "Snails"; I often imagine what certain unmade film productions (monster or otherwise) would have ended up being like, if they were filmed to begin with of course. But there's so little information currently available on "Snails" that the only thing I can do is admire the gorgeous concept art, and hope more details will come to light in the future.

Again, all I can do is play the role of a demented Johnny Appleseed and hope for a monstrous harvest this season.

Direct Blog Posting of the Images, for Posterity Sake: 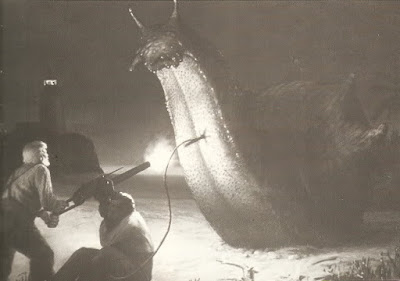 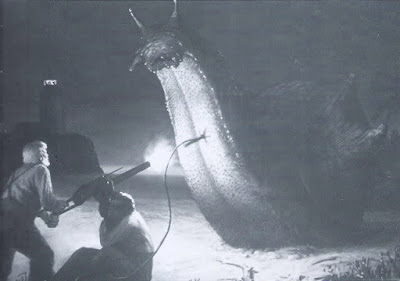